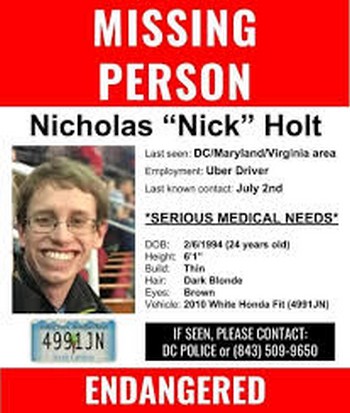 WASHINGTON, DC/MARYLAND/PRINCE GEORGE-Nicholas Holt last made contact with someone on July 2nd. But he has not been heard from since. The last confirmed in person sighting was May 30th. Nick’s phone stopped receiving messages on Facebook July 7th 2018, and no contact has been able to been made with him since then.

According to a family members post, Nick moved to the D.C. area about 8 months ago. His last form of a known residence was a tent he was sleeping out of. It is somewhere near what his family believe to be Prince George. His last known form of employment was Uber and he gave his last Uber ride in June 22nd near Arlington. No other Uber data is available afterwards. He drives a white 2010 Honda Fit with South Carolina plates 4991JN